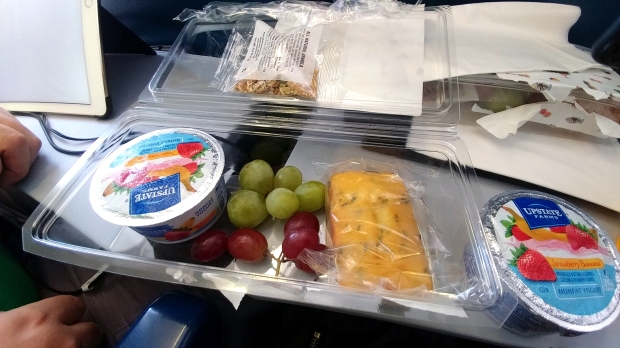 Puff pastry. I never had the opportunity to play with it before I was diagnosed, but thankfully they’re starting to come out with GF puff pastry sheets so you don’t have to suffer through attempting to make it. French Picnic sells a 2-sheet pack of GF puff pastry for $13. I bought mine from a local Whole Foods.

It was easy to work with: let it defrost, roll it out (which I didn’t do and regret), cut some rectangles, fill the center and fold upon itself. Brush egg mixture on while you’re doing this.You treat it the same as regular puff pastry and can just follow a regular puff pastry recipe to get the same results.

The GF Puff Pastry is pretty expensive but it’s definitely worth it for a homemade gluten free breakfast or treat.

Since I was diagnosed last year, I’ve found that Asian recipes are hands down the easiest to convert to gluten-free than many other types of cuisines. A lot of recipes only require some minor replacements, if any, which makes it so much easier to stress out less!

As always, double and triple check the label to confirm gluten-free status. This list is always growing! You’ll also see it’s a lot of Korean stuff… sorry. 🙂 There are also affiliate links for any Amazon products.

Here’s a list of items that are really fundamental to the Asian kitchen:

Tamari Soy Sauce: just to get this off the list, soy sauce is first. There are a few different brands now offering gluten-free, from San J to Kikkoman to others that you’ll find in some Japanese markets. You’ll commonly find San J or Kikkoman at regular supermarkets, though.
Here’s a black-label San-J available on Amazon.

[Fun fact: 조선간장 (Joseon Ganjang) was made from soybeans, salt and water — no wheat!]

Mirin/mirim: [either hon (true) or aji] A must in any Asian kitchen, you will be able to easily find a gluten free mirin/mirim. Not the same as sake, has a lower alcohol content.

Sake: Alcohol. Also easy to find, and should be easy to find gluten free. You will want both mirin and sake.

Sesame Oil: Used in a lot of things, easy to find gluten free.

Gochujang: Red Pepper Paste. This is the toughie. A lot of gochujang is made with wheat nowadays, unfortunately, but is similar to soy sauce in that it was originally GF. There are some more nowadays like Chung Jung One and Wholly Gochujang, but it’s tough pickings. I plan to attempt to make this from scratch soon. [12/28/16 edit: Chung Jung One recently responded to my review on Amazon saying that it’s tested and is GF]
Here it is on Amazon: Gochujang Korean Chili Sauce 7.5Oz.(Pack of 2)

Oyster Sauce: Another one that’s somewhat hard to find, Lee Kum Kee makes a gluten free oyster sauce that looks to be pretty reliable. May be found at Whole Foods or another local crunchy supermarket.

Doenjang: Soybean Paste. The process of making doenjang typically makes soy sauce, this is extremely hard to find GF. Wholly makes a GF version, though. [12/28/16 edit: It tastes just as good as the non-GF version, so buy it up!]
Here it is on Amazon: Wholly Doenjang

Gochugaru: Red pepper powder. Easy to find GF, a lot of bags will be purely the red pepper and nothing else. I use a pepper powder + orange zest mix I found at the Korean market with no issues. Can also make from scratch with dehydrator.

Vinegar & Rice Vinegar: Filipino food uses a LOT of the regular vinegar, and you can’t go wrong having rice vinegar on hand. Both of these are easy to find and GF.

Noodles are another story, which I haven’t had a chance to really look at yet. I’ve seen some japchae noodles stamped with gluten free at the Korean store but haven’t confirmed if actually GF or not.

For a while after I was diagnosed, I gave up making tonkatsu, one of our favorite weekly dinners (that also tastes good a day after). I tried making it again with Aleia’s gluten free bread crumbs but it just wasn’t the same.

However, one day at Sprout’s, I came across this… 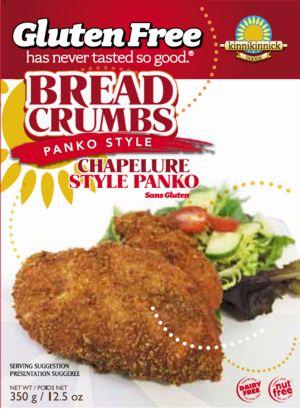 Kinnickinnick’s has had a pretty good track record for taste, so I really really really wanted to give it a shot. I took this home, flour’d some pork with Bob’s Red Mill 1-for-1 gluten free flour (not the beany one), used this panko, and BAM! It was PERFECT. Husband doesn’t usually care for my GF food, but this worked out perfectly.

All you’re doing is following the basic tonkatsu recipe, except exchanging out some core ingredients (here’s Just One Cookbook’s if you need pictures):

That’s literally it. Top it off with Bulldog tonkatsu sauce and you’re all set to yummy. 🙂